The Secret of Ventriloquism by Jon Padgett ~ 2016 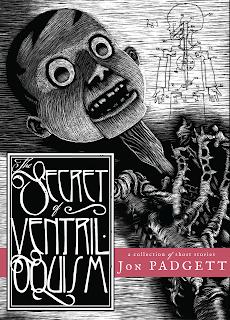 And a presence speaks through them all

"This book was provided by Jon Padgett in exchange for my honest review alongside my proffered thank-you for asking."

After the first three stories were explained to me, I wondered about number four.  Any tension here?  Suspense this time around?  Instead of having the reader 'feel' the read, the narration was being explained what you will or should feel.

Reaching past 30% of this read is all I could take.  There was no need to turn a page and seek out your quest to settle your anxieties the author should have installed into you by this point in the read.  There was no part of a flow.  I felt no part of a theme.  Three down and after I read Origami Dreams - that was strike four - I'm out.

Origami Dreams did have a slight edge to the writing lending itself to mystery and suspense, yet, it was not strong enough to keep me.  Then, let's read a manual.

The next story in line after Origami Dreams is 20 Simple Steps to Ventriloquism.  I couldn't take 20 more explanations.  I perused the steps - they are exactly that - steps on how to be a ventriloquist.  One should know reading into a read for 30 - 50 pages, if this read is for you, you would want to turn the next page.  You're interested.  You're hooked.  That need should be in you by now.
Threw a question at myself - Gee, should I keep reading?  Will all these stories connect somehow in the end?

Jon Padgett has an idea here for a great theme, though after a third of the book was read there was no hint of suspense, no urge.  No flow.  Seemed to be a book of nothing more than miscellaneous stories grouped together to make a novel.   He's trying way too hard to be a writer who has this 'new' edge to writing.

You gotta grab the reader man.  Grab the reader by their throat right off the bat.  You need to hone in on your victims and make them have that urge to turn the page.  If you don't have your reader hooked by at least 50 pages - that curiosity to see if the antagonist gets away and lives for another day or the protagonist ... is fine - you've lost your reader.

Will all these stories connect in the end I kept asking myself and I stopped - this overwhelming feeling came over me - I don't want to work at a read.  I would rather be scared and interested and have that need to turn a page to see and feel that all will be well ... in the end.  If I had reached the end and all the stories did fit together for some extravagant climax, even if it did come from left field and made sense, why would you have me go through so much hell beforehand?

I see this read had some great reviews and from some legitimate sources, I might add.  I don't see their view.

Been sitting here with a busted wrist, following Doctor orders and just want to read if not great stuff, at least good stuff.

I'm going to go and warm my drink.

Recommend?  It's a one star from me folks.


Here's where you can get your fingers on The Secret of Ventriloquism: 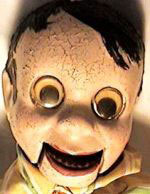 Jon Padgett is a professional--though lapsed--ventriloquist who lives in New Orleans with his spouse, their daughter and two cats.  Padgett is a Senior Editor of Vastarien: a source of critical study and creative response to the corpus of Thomas Ligotti.
He has work out or forthcoming in Pseudopod, Lovecraft eZine, Xnoybis, Antenna::Signals and The Junk Merchants: A Literary Salute to William S. Burroughs.