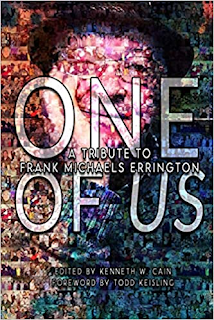 This anthology will become another one of your treasured reads.
Dedicated for Frank
A LOVING HUSBAND AND A DEVOTED FATHER
A DEDICATED BOOK REVIEWER AND HORROR FAN
A KIND AND CARING FRIEND
Author: Kenneth W. Cain, Stephen King, Pete Kahle, Todd Keisling, Tom Deady, Josh Malerman, Paul Tremblay, Jonathan Maberry, Jeff Strand, Tim Waggoner
Publisher: Bloodshot Books (November 14, 2020)
Publication: November 14, 2020
Pages: 556
Language: English
ISBN-10: 1947522361
ISBN-13: 978-1947522367
ASIN: B08P844F5K
Editor: Kenneth W. Cain
Cover & Interior design: Todd Keisling | Dullington Design Co.
Editorial assistance: Somer Canon and Jacque Day
Photos: Frank Michaels Errington, Tony Tremblay, Kenneth W. Cain, Patrick Freivald, and doungjai gam bepko
"A digital version of One of Us was provided by Kenneth Cain in exchange for my honest review alongside my thank-you for asking, John McIlveen."
all the Stars
When I had been contacted by award-winning author John McIlveen (Hannahwhere 2015) on a review for this fantastic tribute to Frank Michaels Errington, I smiled with a saddened heart.
Folks, Frank was a man whom you would have loved to be your neighbor. Yes, he's one of those guys.
I have had the pleasure of meeting Frank, albeit on Facebook, and I enjoyed his presence.  Yep, I had thought, he's one of those guys.
Learned he did reviews for Cemetery Dance Publications;
Off I went and visited his blog, Frank Michaels Errington's Horrible Book Reviews - yep, he's one of those guys.
In the beautiful heartfelt Foreword by Todd Keisling, Todd mentions attending his first writer's conference and felt a bit out of his comfort zone. He was pacing the lobby to find a cellular signal looking for his friends and he must have looked a bit dazzled ~ when he heard a voice ...
Frank had rest assured Todd he was already among friends. "You're one of us."
You see folks? He's one of those guys.
✒ ✒ ✒
Right off home-plate, I would like to thank all of the contributing authors for their work. These stories I have read from you guys, thank you, and let me say, wow, this anthology rocked!
Folks, One of Us is an astounding read compiled by some of the best writers of our current time. Some whom you have never heard of until now. (hey, I'm in the same boat too) Sure, you must have heard of those authors that are mentioned above, but, I'm telling you, you'll have to pick up this read and introduce yourselves to these authors that make up the rest of this delicious anthology. I have the penners listed below.
This anthology will become another one of your treasured reads.
As I read each one of these tales, in the back of my mind throughout the story, how did Frank touch this author's life? I knew damn well, it felt warm to them, and so, I take it as this is the tale they gave to Frank as a thank-you. Folks, these tales have hit it out of the park. A few of them will make you shake your head and grin, some will make your eyes widen, one you'll laugh and laugh and laugh and laugh and laugh -
Without putting a review on all these tales, rest yourselves, this anthology is chock-full to fill your need for horror and dark fantasy.
At the end of every tale, I wanted to have met Frank in person more and more. I imagined him at a writer's conference, sitting there with his grin, completely enrapt in his element. Same kind of atmosphere as a kid in a candy store? I would think so.
The more my eye came across authors talking of reviews, the more my eye came across Frank's name. What folks have said of him, man, such respect was thrown his way.
Folks, The Deadliest Review by Jeff Strand makes the statement of how Frank had such an impact on the horror community. Was some of it out of fear Mr. Strand? Or, dare not to keep approving?  Ah yes, dare not. Frank made a review, the review.
Folks, there are 56 tales of horror and dark fantasy to indulge your appetite in for those days you want to get in some really damn good reading.  The contents of tales within the covers are peppered with anecdotes to Frank from various authors/friends which made the read feel so complete to me. You are going to enjoy each of these stories.
I did and I am.
This anthology has become under the category - a re-read.
✒ ✒ ✒
Proceeds from the sale of this book will be donated in Frank's name to the American Transplant Foundation 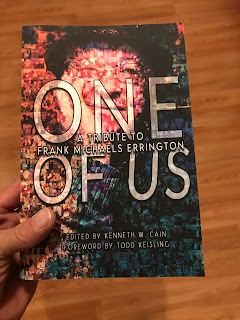 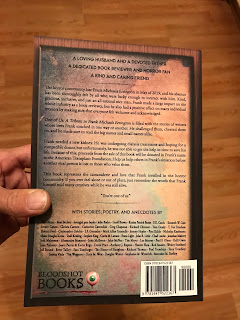