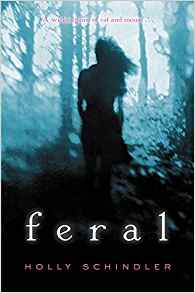 It's too late for you.

Read for my curiosity and a review for Ms. Schindler

Last weekend I picked up a tale that I have been wanting to read for quite some time.  I dove into my been-wanting-to-read-pile and pulled out something, well since its been awhile, something a bit Feral.

Holly Schindler spins a tale from Peculiar, Missouri of two girls meeting under some very strange and horrible occurrences. Some by happenstance? and maybe some by foggy paranormal appearances that happens to the best of us.

Claire Cain is the main character and her journey through this tale takes you on a trek, with Holly's writing making you almost a part of her as she gets to the bottom-line of this mystery.  Ms. Schindler will absorb you into the main character, a bit hypnotically, don't know how, no need to to question it. Just silent thanks to her as you read.

Pace is comfortable and engaging, things are moved along with an outstanding air of mystery through each event.  A few of the scenes were depicted quite vividly, so the pace she has set might want to be picked up bit for a few of you readers.  Maybe not.  Holly has a flair describing gore.

Claire and her dad Dr. Cain arrive in Peculiar from Chicago in a '72 Gremlin on the onslaught of an ice storm.  Her father is on a Sabbatical and she is on one herself from a very personal event she rather would keep covered if all possible.

Claire discovers Serena Sims, the young missing girl.  Dead and surrounded by feral cats shortly after arriving, but, long before this bad feeling she was living through at the 'Bout Out when they first arrived.  'Bout Out is the general store in these Peculiar parts folks.

Old man, the fueling scene, the warning Claire thought she heard; I perked my ears up on the old man ... not as in the bad guy, more as a Stephen King innocent by-standing character coming off his pages visiting yours Ms. Schindler, and Claire.

As the investigation gets under way, local Sheriff Holeman whom hasn't even as much as written a speeding ticket for quite the few years, so ... small town USA, did he overlook a few things?

Here's where the story spins for Claire as you can imagine, a junior in high school and has an innate ability to see pretty much right off the bat, 'Hey, somethin' wrong here' - so she sets off to set things straight, again.  She finds herself taking a different look at her surroundings.  Her senses start talking with her and its always a good thing to listen to your gut.  Right?  Here we go ~

Fighting inner turmoil and going on instinct - it was not, what they thought the death was of Miss Serena Sims.  Claire needs to find out what really happened to Serena before she becomes the next victim.

Filled with great flow to the plot and character development, especially right at the end with the characters.  Sure, I enjoyed the hell out of Becca Holeman's character, she has this air of royalty with - she pretends she doesn't want to be adorned and admired.  What a snoot.  Chas, Casey, and Owen, ordinary high school kids.  Each owning their own and, owning their part in the story.  Ms. Isles reminded me of my high school poetry teacher to the T, other than ending up with an abuser.  Mm.  Moving on ~

Here we have a tale of suspense and mystery flowing pretty damn good, there were parts that gave me a speed bump with me imaging the scenes.  For example, when Claire was asked to approach Mavis' desk, I was there with only those two, then R was there.  Huh?, where did you come from?  I understand its a classroom, yet the writing made me feel there where only two people by her desk.  There were a few spots like that which made me feel like I should be the one looking over my shoulder to see who is all there with me at the scene.

Ice taking the stage with fog taking center rolling around in the story, my vivid imagination enjoyed the eerie coldness.  Juxtapositions filled the atmosphere with this read.   From Claire and Serena, Becca and Chas, boilers producing heat next to icy surroundings, fog, screams, silent screams producing 'This-can't-be-happening-to-me-right-now-oh-but-it-is' bestows for nothing but great reading folks.  So what happened to Serena?  Ms. Schindler is taking you into the woods and, and, well, you're coming along.  And nothing else matters - it's Feral.

Enjoyable for the suspenseful mystery lover

Here's where you can get your fingers on Feral:

Holly Schindler is a hybrid author of critically acclaimed traditionally published and Amazon bestselling independently published books for readers of all ages.  Her work has received starred reviews in Booklist and Publishers Weekly, has won silver and gold medals in ForeWord Reviews Book of the Year and the IPPY Awards, respectively, has been featured on Booklist's Best First Novels for Youth and School Library Journal's What's Hot in YA, and has been a PW Pick of the Week.

Schindler is also owned by a Pekingese named Jake, and is currently consuming large quantities of coffee while working on her next novel.

Readers can keep up with the latest or get in touch at HollySchindler.com

Enjoy my  Spotlight with Holly