The Omega Formula: Power To Die For by Paul Sekulich ~ 2013 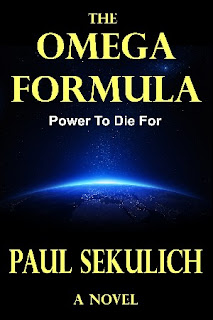 "Do you know why killer bees, fire ants and pit bulls are so dangerous? You can't reason with them."
Enter - Detective Frank Dugan


I love opening a book, crawling in and leaving reality for an hour or two or three or.... Traveling the world through the pages of author's minds is entertainment reader's like myself are privy to and I am glad to say no one needs a passport nor a membership card to enjoy these travels.

The Omega Formula carried me up and down the eastern coastline of the United States and into the Midwest with unexpected splashes of Atlantic seawater.

When I first read the synopsis and the blurbs for this novel, the question I asked myself, "A detective caper, Mmm, is he (Frank Dugan) going to be another LAPD Detective Hieronymus "Harry" Bosch? or..."

I wanted to read The Omega Formula with Paul's voice as a writer as my main character and turns out this multi-twist can't-put-it-down mystery page turner claims little to this outstanding read. Frank Dugan with his brazen come-backs to his enemies (foreign and domestic) is a detective you want working for you. Frank is in his own class and his class is in session - he will get his answers come hell or high water.

Frank's father, Joe, is being harassed (putting it lightly) to remember what his father, William, was working on for the government during World War II by two men wearing Michael Myers masks in his own home. They worked Joe over pretty damn good ..."I'm not telling you squat," Joe said and closed his eyes.

Even though there was a sadness in Frank's heart that his father had died due to cardiac arrest, according to Jennifer Melton at St. Luke's Hospital in Baltimore, mourning was not on his list as he asked for some time off to Sheriff Roland Brand. In fact, Frank hated the sonofabitch.

A thousand miles away from Baltimore, Frank Dugan at the Martin County Sheriff's Department in Stuart, Florida was contemplating his agonizing future of heading to Baltimore to settle the estate and get the bastard in the ground as soon as possible.

Arriving in Baltimore Frank meets his former partner Alasdair MacGowan and is taken aback a bit when he learns Alasdair got married. Celine MacGowan had worked for the NSA for over ten years and, a hell of a cook by the way, is Alasdair's everything - charmimg, beautiful, and intelligent.

Frank goes to the the morgue at St. Luke's hospital to ID his father and being a bit of an expert on needle marks, asks "Does the emergency room give injections behind the ear?" "My God," the young technician says under his breath.

Can anyone say autopsy?

Frank and Alasdair head to Joe's place and do their own investigation of the crime scene. William, Frank's grandfather, has had the pleasure of putting Frank on an endless course of figuring out "puzzles" throughout his life and coming across a few puzzles overlooked by CSI, Alasdair and Frank learn of a safe room hidden beneath the garage. They find a manila file labeled The Omega Formula and an old 6-inch movie reel nearly full of film. Celine can convert this into digital format.

Now folks, this film shows a devastation that could only render the greatest fear and complete capitulation one could give to the possessor. Your white flag would fly before your next thought. No wonder Joe went to his grave withholding this secret. And no wonder why the Michael Myer twins wanted it.

The secret lies hidden somewhere in America and it's only a matter of time before William's final? puzzle gets figured out and hopefully in the right hands. The structure and plausible scenes moved seamlessly as I was entrapped into Paul's central theme. A knowledge of the most powerful weapon ever known and in itself was the keystone for the end of the war.

Characters were well developed and described in a believable manner. There are situations throughout this novel, as they play out, are exactly what one would do.

This harrowing novel Paul Sekulich has written has actual facts and artifacts pertaining to the war with Japan and ultimately their surrender and he took great care in conveying what he could bend into fiction and what he shouldn't, leaving authenticity in its rightful place. Examples would be the silk maps that were relatively impervious to water damage used by airmen in World War II , the large Helvetica "R" on the tail of the Enola Gay, why Hiroshima and Nagasaki were the targets and how he bent some thought on those photographs on board the U.S.S. Missouri; in particularly one civilian there among all those military personnel.

I have had the pleasure of talking with Paul Sekulich on the phone one evening and he is adamant in making sure the places and situations are true to the reader. I have always voiced myself on the appreciation authors take to do their homework for a believable read.

Believable? Frank finds himself in a dark and humid situation where you'll find yourself slowly shaking your head back and forth while wearing a grin saying, "Oh Frank, what now will ..." Hell it's almost comical but I can see it happening with what/who Frank is dealing with. Aye, believable.

The ending ties all loose ends up neatly and coherently including all "clues" left by William, or, wait a sec ... all clues?

The Omega Formula grabbed me with an explosion of satisfaction and I thank you Paul for inquiring if your music teacher in your younger days was relation. A wonderful read. You have a hell of a character here and I am looking forward to read more of Detective Frank Dugan.


Folks, I highly recommend this read to all you detective thriller readers. You will not be disappointed on any page.
And for those who are not, you will absolutely love how Frank gets his answers ... I did.

Here's where you can get your fingers on The Omega Formula: Power To Die For 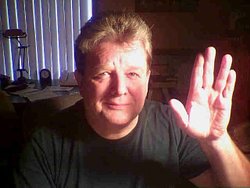 Paul Sekulich is a thoroughly traveled writer who has lived in New York, Detroit, Chicago; Stuart and Palm Beach, Florida; Manhattan Beach, Los Angeles and Hollywood, California. He holds a B.A. degree in Theatre from the University of Maryland and Masters of Fine Arts credits from Towson University and the University of Southern California.

He is a member of the Screen Actors Guild, The American Federation of Television & Radio Artists (now SAG-AFTRA) and the Actors Equity Association. As a former adjunct professor of theatre he has directed numerous college productions and has taught acting, directing, and screenwriting.
In Hollywood, he worked as a script doctor and contributor for two, prime time television sitcoms.

He has completed his first three thriller novels, The Omega Formula, and A Killer Season. His third book, another Detective Frank Dugan thriller, Resort Isle, is complete and available now. In the spring of 2017, he plans to debut Murder Comes to Paradise, another in the Frank Dugan detective series.
He has written, acted in, produced and directed films, commercials and stage productions since he was eighteen and has won awards for his work. He owned and operated The Limestone Dinner Theatre for several years and now teaches college seminars on novel writing, self-publishing, and scriptwriting for television and the movies.

Read my interview with Paul Sekulich

✒ ✒ ✒
Reviewed by Jeff Kivela No comments: