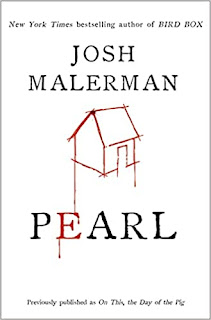 Malerman will put a chill into any horror reader's bones

Read from the teetering tbr ~

Folks, Josh Malerman is an astounding writer with novels reaching into a realm of what is known as must-reads.

After you all had read Bird Box and those of you who watched the movie, I know damn well some of you picked up another read from this guy ...

... the way Malerman introduced me to Walter Kopple's family with his grandson Jeff killing one of his pigs in such a hypnotic-induced descriptive way, starting right off the rip with Pearl in action, Malerman had me for hours.

Josh, this writing captivates the audience like an old friend putting their arm around your shoulder, and then, Pearl makes you sing. Yes, no Pearl does not mind if you can carry a tune or not ... he'll make you bring it in. He'll make you sing for him. And, as the chapters unfold, you eventually put your other arm around our other shoulder, and ... you bring it in for the reader.

To be honest folks, I thought a telepathic pig on his quest to have humans kill for him was going to be a 'What-the-hell-are-you-thinking-putting-this-out-there-after-writing-Bird Box?' kind of tale ... hoping all along it has to have a dynamite twist. And after reading, I found out, Pearl is a legend ~ Walter's daughter, Sherry, and her sons Jeff and Aaron experience firsthand, wrath in unspeakable terms with a pig and his bidding.

As the town folks are fearing what is going on at Kopple's farm, in the end after all is said and done, a bigger fear is revealed. That is for you dear reader.

Folks, this tale of Pearl (and all the while I'm picturing Arnold from Green Acres) is set pretty much on Murdock Road in Chowder, Michigan not too far from Goblin, where the population is reflected of the handful of characters making up this murderous read. Just as the characters grew through this story, (and some that don't) so did the town of Chowder. I would hopefully believe.

The town folks heard that Jeff killed one of Walter's pigs out of sheer nothingness. Jeff defended himself saying a voice told him to do it. Pearl, the pig told him to do it. Now his brother Aaron thinks he's crazy and when word gets out around school, well hell, the kid's beside himself now.

And of course, there are those kids who have to see this pig.

The characters, especially the two stoners, Mitch and Jerry (making up the members of the Plastic Satanic Club), and Susan (Miss Goody-two-shoes {almost}) are realistic, they were wonderfully drawn, and their inner-monologue was my glue to become a supporter for them. Man, I wished them well through this read.

The secondary characters rounded out the story. Their standings in the community, their dialog, their actions, were drawn out and on point for me with the way you penned this story. When people in town started whispering Walter's grandson heard a voice that commanded him to kill, I could picture the scenes quite well. All throughout this story, I mean, straight from the beginning. And, you drop atmosphere all over the place. I was there. I loved the county fair scenes when I wasn't hanging around on Murdock. I even smelled fair food. Rurally, Malerman, you brought that part of Michigan to me and I met some folks whom I wouldn't mind meeting again.

The pace was action-packed I would like to mention and Malerman puts the reader in two and three places at once during the read. This is non-stop edge-of-your-seat horror writing. The antici ... ... pation is crazy. Something is constantly going on, this is a page-turner.

Concerning the character Bob Buck the pig farmer, how many real-life Bob's are presently alive and kickin' and laughing at this read? This tale made an excellent view into how some things are seen and maybe, an awakening for some? Folks, Bob Buck is another way of looking at the local pig farmer and the ilk he could surround himself with. I loved this view into our mid-west country scenery ~ through a different eye.

I believe if I recall correctly, Pearl only harms two types of animals and leaves the others in high-anxiety lived moments. (Note-to-self moment as I write this review) A ponder thought.

Mr. Malerman, the use of parenthesis in your clarifications as I read along was humorously 'grinnable'.  Made the sentences move for some reason. So, I kept turning pages. I don't believe I have come across writing with those clarifications (parenthesis) so close to each other through the paragraphs. I found it ... I'm stuck in provoke. The writing was there vividly and the extra clarification really wasn't needed in my opinion, but, you through it in anyways. I'm liking it.

Walked around a bit flipping through some pages and asked me what I didn't care for in this read; what felt to me were these wanna-be catchphrase words Jerry and Mitch were using to stand out?: pukin', jebus, and nuckin futz. Sure glad they weren't indulged upon for use, that really weighs down a read; this was not weighed, and I do have respect for the word patois. Josh, you might like to hang with a few neighbors of mine down in Knockemstiff, Ohio. Just sayin'.

The ending was a bit out there for me for some odd-ball reason I've got to find. But, I would tell you I had a blast reading this tale of murder and revenge in Chowder. Folks, this is a bloody novel, with scenes that will fill that chill for your horror appetite. Yes, yes it will.

I would recommend you visit Kopple's farm if you love having your face indulged in horror.

Here's where you can get your fingers on Pearl: 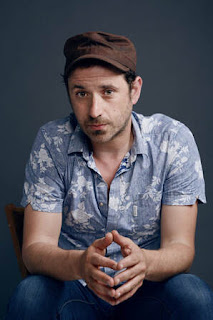 Josh Malerman is an American author and also one of two singer/songwriters for the rock band The High Strung, whose song "The Luck You Got" can be heard as the theme song to the Showtime show "Shameless." His book Bird Box was filmed as a feature film starring Sandra Bullock, John Malkovich, and Sarah Paulson. Bird Box was also nominated for the Stoker Award, the Shirley Jackson Award, and the James Herbert Award. His books Black Mad Wheel and Goblin have also been nominated for Stoker Awards.

Connect with Josh and see what he's up to