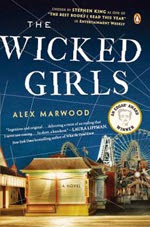 One fateful summer morning in 1986, two 11-year-old girls meet for the first time and by the end of the day are charged with murder.

Alex Marwood has her story unfold with Amber cleaning the House of Mirrors at Funnland, an amusement park located in the fictional resort town of Whitmouth on the English Channel and stumbles over a dead teenage girl. At first I couldn't understand her first reaction of wanting to hide the girl until it came clear Amber did not want her photo in the media of being the one who discovered the girl.

Kirsty is supporting two kids and an unemployed husband (Jim) as a reporter for a London newspaper and she travels to Whitmouth to cover the murder. The third female murder during that summer.
The descriptive scenes of Amber's wretched work environment as a cleaner and her co-workers who are have the visage of run-down workers from the economy portray Whitmouth's poverty.  The paper Kirsty works for wants Kirsty to report for the Sunday edition on how to make their readers feel better about their lives. Her paper claims "…No town where a killer is on the loose is allowed to be a nice town; it’s an unwritten law." Whitmouth is a town in economic recession and its growth is based on drunken visitors on short holiday spurts.  It makes her job a bit challenging.

Kirsty and Amber meet all these years later under very believable circumstances.

Jim and Kirsty throw a dinner "networking-employment" party for Jim and one of the guests had voiced himself on the serial murders that are going on and crime in general that ended with juvenile offenders being "little monsters" and should be locked up before there's any more victims from them.
Kirsty finds his remarks distressing, being labeled as a "wicked girl" from her past by the media when she and her day old new acquaintance were found guilty of abducting and murdering a four year old.

The girls were tried and convicted and sent to different juvenile facilities and were ordered never to see each other again. Ever. Kirsty has not told Jim or their kids about her past.
Amber has never told her partner Vic. Ever. And this charismatic handsome Vic holds his own secret which is revealed in a twisted way that twists the reader - even Amber.

The novel portrays Kirsty and Amber as productive, caring, loving adults and keeps you guessing on who is committing these murders. Well, with that thought, there is Martin.
Martin is a stalker who is badgering a woman who had dumped him after a one-night stand and is pissed off at the drunks that come to his town and is convinced that the murdered women "asked for it". Marwood leaves you thinking throughout many chapters, could it be Martin? This woman-hating stalker has redefined louse.

You read that Kirsty and Amber were both abused as kids and did they grow into being adult murderer's? Those two kids that had abducted and killed a four year old? Or was is it a complete innocent misjudgement on whose part - theirs?, societies?, both? Marwood leaves you thinking and pondering who really is the victim? even though you read who the killer is. Alex Marwood has a great novel here that has a twisted climax ending that you do not see coming.

I would recommend the hell out of this one, folks

Here's where you can get your fingers on The Wicked Girls:

Serena Mackesy is the daughter of the Scots-born Oxford military historian Piers Mackesy. She is also the granddaughter on her mother's side of the novelist Margaret Kennedy and on her father's side of Leonora Mackesy (born 1902), who wrote Harlequin romances as Leonora Starr and Dorothy Rivers.

She grew up on the Oxfordshire/Gloucestershire borders and went to school in Oxford, where she gained a University of London degree in English literature from Manchester College, Oxford.

Mackesy worked variously in offices, as an English teacher and on door-to-door sales before, as she told an interviewer in 2000: "I arrived at The Independent as a temp to cover for the secretary on the TV listings page... for a couple of weeks, realised I'd found somewhere I enjoyed and somehow never left.... I think the first writing I did was little potted movie previews on the weekend TV spread. The first thing anyone seemed to actually notice was a small daily bar review I used to write when the paper had a London supplement."  By 1997 she was a regular columnist.

As a child Serena Mackesy was a keen rider. She has described Malta as her favourite place in the world.

In 2012 she adopted the pseudonym Alex Marwood with the publication of the psychological thriller The Wicked Girls. This became a word-of-mouth bestseller in the UK, and was translated into 17 languages. It was included in Stephen King's Entertainment Weekly list of "The Ten Best Books I read this year" in 2013 and was shortlisted for an ITW award in the same year. The book won the Edgar Allan Poe Award (best paperback original) in 2014 and is also shortlisted for the Macavity and Anthony awards in the United States. A follow-up, The Killer Next Door, was published in 2014 to critical acclaim.

Work of Mackesy's has been translated into 19 languages. Writers she admires include Kurt Vonnegut, C. S. Lewis (Narnia series), John Donne and the "other" Elizabeth Taylor (Angel).