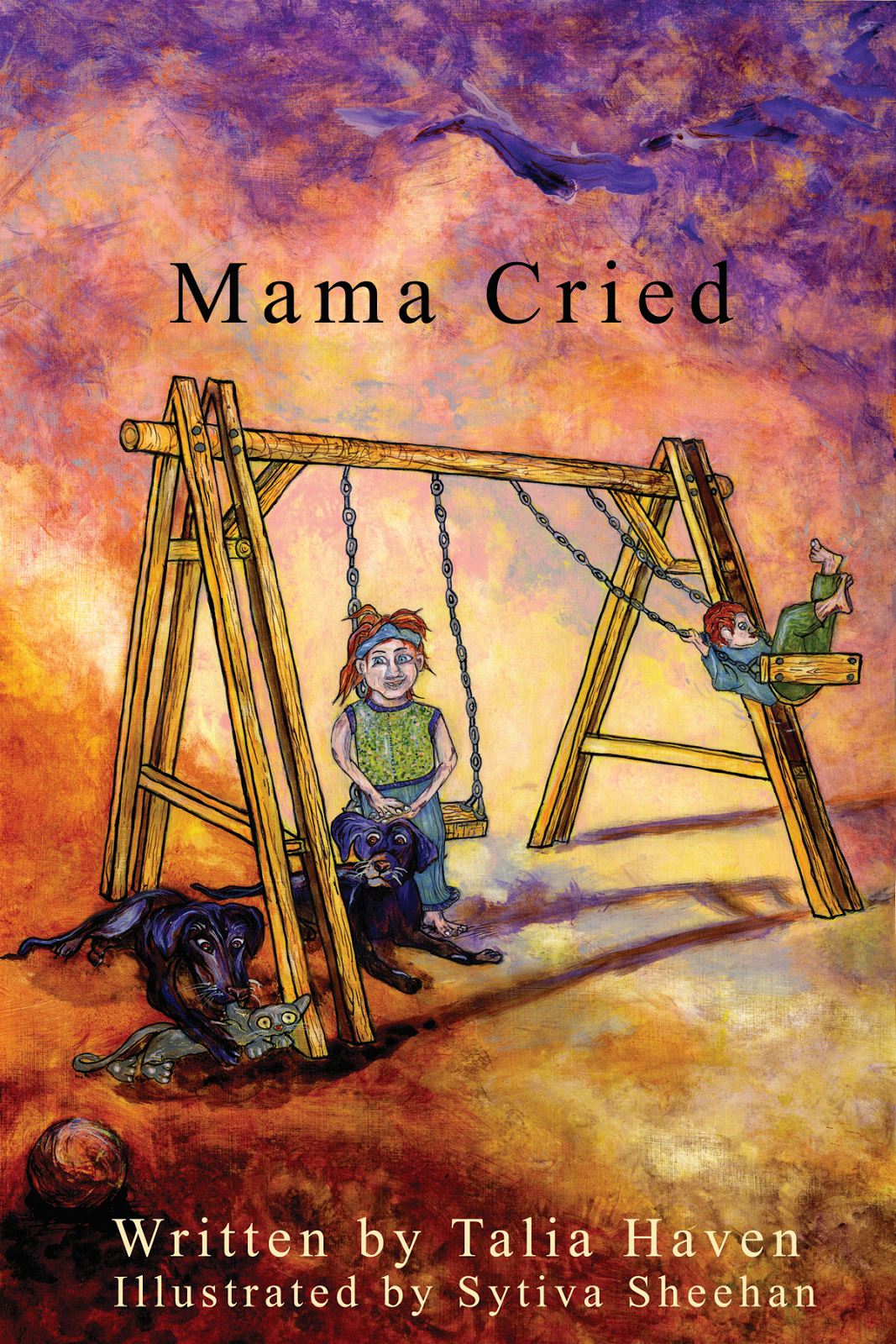 
"This book was provided by Deborah DeVore in exchange for my honest review alongside my proffered thank-you for asking."

This story took me by surprise - seeing it was only 12 pages my first thought it could be an very long prelude to a novel. Well the message within those 12 pages is a novel in and of itself.

Jenny a young girl is playing in a playground on the swing set with her friends Christa and Jamal and their dogs. They all have two dogs each. When suddenly Azula the guardian shows up and tells Jenny to tell her friends goodbye.

Azula, Jenny and her two puppies - Morgan and Wilson continue to walk and come upon a heavy steel door. Set inside grey-painted cinderblock, on either side of the cinderblock is a black nothingness.

"Do you remember why Mama cried?" Azul asks and Jenny replies with a "No". She tells Jenny that today is the day that she has to make a big decision and there is no right or wrong answer & as soon as they walk through that door Morgan and Wilson will grow up and become hounds but they will still be hers.

Theodore James Moore III can see Azula, Jenny and her two dogs - no one else can. Azula tells  the hateful looking man "Today is your judgment day, and Jenny gets to decide your fate."

The writing is very dark and mysterious in a deep dreadful approach. Mama Cried is a stand-alone story that has a huge message from a child's POV. As you read you hope there is back-story coming so you would understand what horrible nightmare this little girl went through.

As you read this story you can't scan your finger quick enough over a Kindle or NOOK nor a page in fear of tearing not only the dog-ear off but the page itself. Talia Haven has a way with words to pack such a blow to your emotions.

After finding out why Mama cried, Jenny stirs the reader's heart, mind and soul leaving you wanting more details. Yet I believe this is exactly what Talia Haven had in mind as she wrote. This story will leave a vivid memory in your thoughts for some time to come.

Talia's theme, mood and tone takes care of the setting as a horror movie would. Her characters did not have to be explained with bio and the such - there was no need. This story has an air of mystification that grabs you and has a magnetic allurement that will not let you go until you find out why Mama Cried.

You'll be relieved when you know Mad Kitty is there.

Deborah DeVore had found my blog on The IndieView


Here is where you can get your fingers on Mama Cried: 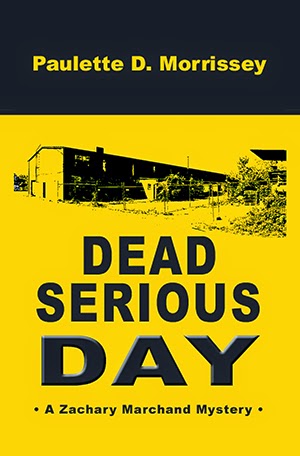 Ellen Cooper makes one rash decision, and suddenly her life is turned upside down. She’s suspected of murder and kidnapping all in the same day.


"This book was provided by Paulette D. Morrissey in exchange for my honest review alongside my proffered thank-you for asking."


This mystery novel had me engrossed from the beginning, Dead Serious Day: A Zachary Marchand Mystery (Zachary Marchand Mysteries Book 1) is a great debut from a very talented author. Paulette's writing was well thought out and seriously, had me turning pages. The twists and turns throughout the story had satisfying outcomes so the reader would be entranced in the story-line.

Had me from the beginning:


Thirty-four year old Ellen Cooper made a very ill-considered decision on the biggest morning of her career; turns out that decision gave her an insight into complete madness.


Her ever loveable house-husband Gary was not a morning person. Ellen had a job opportunity that would set their finances in great standings and being late was not an option. With two young adorable children - Katie and Bridget - to get ready for day care and her herself to do last minute touch-ups, Gary needed to get up and help.


One problem - Gary was dead.


Justifying Gary would want her to get that bid even though she should have called the authorities, she left to drop the kids off at their day care and then nail that bid. She'll come home and act as if she had just found him.

Coming home from her job bid on the Fullerton project, which was granted to her, reality struck home. The audacious decision she had made to go to work instead of dealing with a legal problem became a double nightmare for Ellen. And then some.

Jackie Sievers, a neighbor of about ten years, came strolling over when Ellen came home with her "Hi Hon! ..."! in her sing-song of a voice to do their afternoon chat and wanting to borrow that daring red dress.

Both women soon found that not only Ellen's dead husband not there in their bed but Lou, Jackie's husband, was in his stead - dead also.

After spending 8 years on the police force in Milwaukee Zachary Marchand turned private investigator sits Ellen down and tries to decipher her mess. Timing was all off from what Ellen explained to him and then after some humbled insight on Ellen's part she decided to come clean with Zach.

Explaining that she found her husband Gary dead this morning and with her job bid so important she felt Gary would have wanted her to do what she did. How her next door neighbor Lou ended up in her bed dead also and her husband missing was a complete mystery.

Jackie of course thought of affairs. Burning mad, she left for her house.

To make matters worse, a few hours later Ellen learns that her two children have gone missing from their day care.
Being suspected of a double homicide and kidnapping in the span of a day would set anyone into shock. Especially when you know you are innocent.

Paulette's plot is well thought out and she had created suspense in a tirelessly way for the reader. Such a way that you can't put the book down. The twists and turns keeps you wanting to read and hoping for justice. Even her sub-plot with Rudy.

Ms. Morrissey moved coherently through time as Zach delved into everyone's past. The pace of the novel is not quickened to interrupt any "self-thoughts" as you try to figure the whodunnit. Nicely done Paulette.

Her characters are very believable, and I really don't want to sound so cliche, nevertheless her characters had shown true human emotion. Especially the parts where Ellen grieves for her missing family. On the back porch where she sat and let the tears flow, her children's bedroom, the realization when reality was hitting home, Zach was there and needed that human contact.
Even the anger you read of the antagonist. Paulette wrote in a very "human connection way".

Dialogue was positioned for each character vividly so you could hear the difference in each person without exception. Their interior-dialogue was on point, you would expect them to think the way they were. As I had mentioned - polished author.

Paulette Morrissey explained the story's location, weather, town's scenery, history - all in a very balanced tone and overall mood for a great mystery. Yes, this debut is a great start for her series.

Thought of Michael Connelly and LAPD Detective Hieronymus "Harry" Bosch when I first started reading but glad that Zach and Harry are two different guys. Zachary is a character all on his own with his unruly hair.
I would recommend this read for all mystery lover's and if your not one - you will become one.

Here's where you can get your fingers on Dead Serious Day:

Dead Serious Day is Paulette Morrissey's first full length mystery novel and she is working on the sequel in the Zachary Marchand Mystery series. The second book is called "Not My Life" and is due out in late spring 2015.