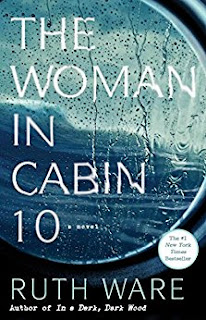 She believes there has been a murder, everyone thinks she's crazy

I was expecting too much from this read.  All the hype and a NY Times best seller?

It opened up with the protagonist, Lo Blacklock, being burgled.  Lo, a journalist who suffers from childhood panic attacks, works for a travel rag and she has landed her dream assignment that would put her back into being noticed as a legit and unbelievable reporter – a week on the maiden voyage of the luxurious cruise liner the Aurora in the North Sea.

After you try to feel for Lo and her shortcomings, I had to give up on her and wished she was the one thrown over the side.  Being burgled in the beginning of the tale, this I believe, sets the stage for her neurotic behavior.  Her constant repetitive petulant dialogue was unnerving and her character did not grow through the tale.  She whined, complained, always drank too much even when she knows she shouldn’t, and her decision making was immature for an adult.

The story was pretty much about the protagonist rather than the woman in cabin ten.  Sure there is a mystery – one night Lo had seen something or someone being tossed over the side from cabin ten’s veranda.  She tells security and the ship still sails – why?  Well, after inspection all passengers are accounted for.

She tells security she did see a woman in cabin ten and actually talked with her, even borrowed some mascara.  When security opens cabin ten, there is no one there and no belongings in sight.  What?

Okay the mystery begins.  From here on out the story needed all kinds of cliff-hangers and excitement, but, to no avail.  This tale was written with a  monotone level of drawn out whining from the protagonist, a pace that was slower than the tortoise in that infamous race and a plethora of one-dimensional characters that contributed pretty much nothing for the tale.  And, a plot that can only be describe as simple.

I am surprised this read had accolades.  The story could have been better as a short-story and then I could see those accolades.  No, on second thought, the tale was too boring and repetitive with Lo.  The read kept me for a couple of reasons:  One, I hoped for intrigue that was going to be on the next page (never happened); Two, had to find out if those accolades were resourceful (they were not); Three, after ¾ of the read what’s a few more yawns?  And four, had to finish it to see how it ended.

The ending did not satisfy me.  There was some excitement I should say with the chase and how that ended and without giving the ending away, I will tell you it does not matter how rich you are and/or what kind of strings you can pull to have your way, happiness will not be found in a dollar bill when it illegally comes floating your way.


Here's where you can get your fingers on The Woman in Cabin 10: 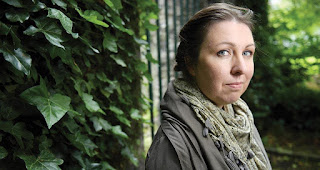 Ruth Ware grew up in Sussex, on the south coast of England. After graduating from Manchester University she moved to Paris, before settling in North London. She has worked as a waitress, a bookseller, a teacher of English as a foreign language and a press officer, and is the internationally bestselling author of In a Dark, Dark Wood, The Woman in Cabin 10, and the forthcoming The Lying Game (July 2017). She is married with two small children.