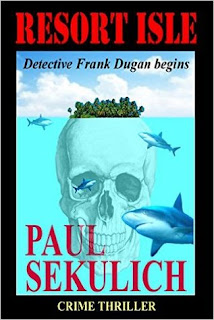 The birth of why killer bees, fire ants and pit bulls flee from
Detective Frank Dugan


A supreme multi-twist can't-put-it-down crime thriller.  This is a start of a series you will want to follow  ~

Paul's writing is page-turning phenomenal work.  Crafting the flow of the plot with the theme and surrounding you in Frank Dugan's atmosphere page after page after page to an astounding end, I would venture to say Mr. Sekulich is a writer's writer.

I have read Paul Sekulich's The Omega Formula and it grabbed me with an explosion of satisfaction and learned of MacGuffin's in A Killer Season: Betting in Vegas Can Be Murder..  Both of these reads are superb.

Resort Isle is a read I personally waited too long to read, introducing Detective Frank Dugan from the San Diego Police Department and his love with the open water.

Could you imagine having to go 90 miles out of your way on your 6th wedding anniversary to find out why this dieing man whispered your name?  It's what the boss wants, so you go.

Meanwhile, a horrific crime is taking place and when you find out what took place, you just couldn't get back quick enough.

Frank had enough of these damn criminals getting to court and eventually back out on the streets.

After votes were cast in the election, Senator Dimino... passed a bill that Frank fervently helped with and now Resort Isle is for the worst of the worst criminals.  For the rest of their natural lives.

An island, just a speck about a 100 miles off the coast of Calif. - all to themselves.  In comparison, Manhattan Island is only 34 sq mil., so here, you have a 32 square mile self-governing community with the waters infested with sharks and with a resident and Navy gunboats floating around.  Hell you could throw up your hammock anywhere and get that tan.  Society is leaving you alone.  Drink your coconut milk elixirs and enjoy the sunsets for the rest of your life.

Frank personally interviews the candidates for the island and over time, the community grows, as long as crime is still happening of course.  And as time moves on, Frank is trying his damnedest to get all four 'suspects' to pay for their horrific crime.  A great chase to the border of Mexico ensues, a couple of  'suspects' on open water ~

Frank knows their luck is running out the way the chapters read, and folks this is a mild spoiler, yet, you know - Two down.  Then,

Frank gets in a jam and witnesses a graphic murder scene take place. Three down.  But the jam he's in, gets bigger.  Finds himself being found guilty of the murder he witnessed and will live for the rest of his natural days on Resort Isle.  On that Isle, the last name on his list.


Paul, your research shows a respectful passion: ships/boats, water, detective capers with the utmost respect to fairness and their procedures, military at the ready, reality, good wine with your victuals and enjoy great entertainment. I know you have a blast living with Frank.

The appreciation from the reader when reading your work, would be ten-fold on the fusion of reality and fiction.  The atmosphere you build also includes the reader.  Your penmanship to craft a tale remarkably engaging and with such magnetism need to turn the page, I applaud with standing ovation from my chair here.  Kudos and please, an encore, I can read more.

Your writing captures the moments.  You break out eye-popping twists and you have the reader right there with the characters, as if they were eye-witnesses.  And speaking of the characters, their backgrounds were well colored with individual backdrops.  Frank sure has a hell of a background.

Suspense, well that's where your finger can't turn the page quick enough for starters, outstandingly, this read is chock full of suspense.  Love how you tie your chapters together Paul; I am impressed and fascinated in your writing.


Thank you Paul, I tip my hat and proffer a bow.  Supreme writing in all three reads I have read.

As you read folks, you are immersed in Frank Dugan's world.  Plan ahead -


Here's where you can get your fingers on Resort Isle:

Paul Sekulich is a thoroughly traveled writer who has lived in New York, Detroit, Chicago; Stuart and Palm Beach, Florida; Manhattan Beach, Los Angeles and Hollywood, California.  He holds a B.A. degree in Theatre from the University of Maryland and Masters of Fine Arts credits from Towson University and the University of Southern California.

He is a member of the Screen Actors Guild, The American Federation of Television & Radio Artists (now SAG-AFTRA) and the Actors Equity Association.  As a former adjunct professor of theatre he has directed numerous college productions and has taught acting, directing, and screenwriting.
In Hollywood, he worked as a script doctor and contributor for two, prime time television sitcoms.

He has completed his first three thriller novels, The Omega Formula, and A Killer Season. His third book, another Detective Frank Dugan thriller, Resort Isle, is complete and available now.  In the spring of 2017, he plans to debut Murder Comes to Paradise, another in the Frank Dugan detective series.

He has written, acted in, produced and directed films, commercials and stage productions since he was eighteen and has won awards for his work.  He owned and operated The Limestone Dinner Theatre for several years and now teaches college seminars on novel writing, self-publishing, and scriptwriting for television and the movies.

Enjoy my interview with Paul Sekulich