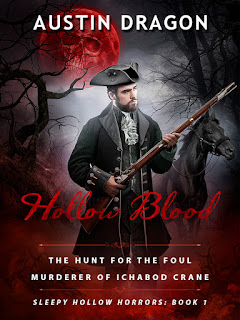 "To blame the foul murder of a good man on an imaginary apparition may be the way of the superstitious folk of these sleepy country-sides, but my vengeance upon his true murderer shall not be denied."

"This book was provided by Austin Dragon in exchange for my honest review alongside my proffered thank-you for asking."

Everyone who is in love with the fabled legend of Sleepy Hollow will be captivated along with Julian on the 'hunt' and confrontation for the foul murderer of Ichabod Crane.

In this engrossing 3 part novel, it has been ten years since the last sighting of Ichabod and the Headless Horseman riding on his horse of Death. The folk of Sleepy Hollow and the near-by town Tarry Town like it that way.

In part 1, BROM BONES, Austin Dragon takes you on a ride with a man whose mind is set on a mission so fierce even coming to a "road-block" does not deter the hunt when it comes to blood.

Julian rides into the idyllic Sleepy Hollow meaning for business in the most gentleman like way, and stirs up the nest. Letting it be known, there will be compensation to anyone with information of Ichabod Crane - dead or alive - to settle the affairs of the Estate of  J. Doyle Senior of New Haven, Connecticut.

Folks soon learn the nightmare of what had become a hushed taboo cannot be left well enough alone when it comes to satisfying the scales of justice. Julian is there and demands the superstitious legend of a wrongful death is brought to light. And then settled his way.

Trying to run Julian out of town, the Sleepy Hollow Boys soon find out that Julian is there on business and the gripping scenes Austin Dragon takes you through are picture perfect. A man on a mission - they learned.

Accusing the wrong perpetrator, and believing the motive is there, Julian is about to put an end to all of this superstitious nonsense when the Marshal of the region shows and puts Julian at rest with the accusation.

Being rest assured Ichabod is alive and kickin' the Marshal will take Julian to him.

Part 2, THE MARSHAL, we learn of Damian Marshall being a US Marshal for seven years with a track record of being the best loved Marshal in all of the land. As the story moves along with a pace comfortable for the reader, Austin Dragon makes you turn pages with anticipation.

Taking you into the next chapters, his theme and setting are point on as he continues the legend of Sleepy Hollow. Austin is a fine writer and I believe he keeps his audience in mind as he writes. When you read this novel you can picture the surrounding areas and the folks that make up this great novel.

Characters were described appropriately for the time frame along with their dialogue. I love it when an author can make the reader see and hear all.

Part 2 has all the action I loved in this read. There are scenes that keep your eyes glued to the pages. Austin Dragon writes of actual history of this particular time frame and with his imagination, he incorporates the two into a great weekend mystery read.

THE HESSIAN is part 3 and gives a satisfying closure to the first of this 2 book series. There is a part in the chapter Ride! Across the Bridge From Hell! that had me confused. When Julian was riding toward the hell, in the next minute, he looks over his shoulder and he's riding from hell. Hmm.

Only down-fall in this read for me was there was not enough horror. The novel was an extending story of the fabled legend and I had entertained my brain for horror. Could very will be in the closing novel of this series.
It is a great twist on the legend and kudos are sent with a slap on the back for your imagination Mr. Dragon.

Austin Dragon nails a great spin on avenging the death of one Ichabod Crane...or, will the Headless Horseman continue to ride his Death horse?

Very good read, I do recommend.


Here's where you can get your fingers on Hollow Blood - The Hunt For The Foul Murderer Of Ichabod Crane:

Enjoy my interview with Austin Dragon 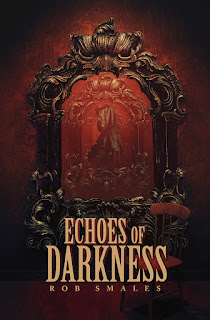