The Witches Of Armour Hill: Switch by Alyssa Cooper ~ 2015 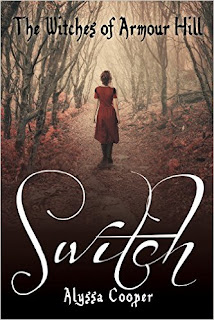 
"This book was provided by Alyssa Cooper in exchange for my honest review alongside my proffered thank-you for asking."

Ms. Alyssa Cooper's first self-published novel The Witches Of Armour Hill: Switch is ingenious and original. An exciting ride with the descendants of local lore of Peterborough, Ontario.  Legend says that in the 1840’s, a local woman was burned at the stake on Armour Hill for being a witch. She’s been seen roaming the woods behind the Peterborough Lift Lock.

The Witches Of Armour Hill: Switch is an engrossing tale packed with lies, deception, magic, fantasy, and the desire to know the truth.

Margaret May Reis, a 16 year old witch that had been passed from one family member to the next for the last thirteen years, is in pursuit of finding her mother and sister.

Sent to live with a cousin she’s never met, in a city she doesn't remember, Maggie is sure that life as she knows it is over. It doesn't take her long to learn that Peterborough is not at all what it seems. Her first week in the city, Maggie meets a stray cat named Elowen, who seems to appear out of thin air, and then Maggie finds herself at the food court at the mall and meets Rhosyn Meyers - Rhosyn and her sleek black rabbit Belladonna.

From here Ms. Cooper brings the reader onto a magical fantasy journey. Along with some of the local scenery of the Otonabee River, the Lift Lock, mentioning the town of Ashburnham in her novel, from her writing, Ms. Cooper incorporates a beautiful image to the readers. Spellbound writing.

Rhosyn Meyers invites Maggie for a walk and they reach the Lift Lock. And yep, I could see Rhosyn smiling to herself on the way there. And Maggie with a wondering look, but, trustful feelings toward Rhosyn they set off.
The dialog between these two, you can see why they become best friends. That was great dialog.

As Maggie finds herself at the comforting sanctuary of the Ashburnham Coven of Witches at the Morgane House, she is introduced to Amelia Valk, the Matriarch, and her familiar Elah. From Amelia's first look at Maggie, Maggie felt chilled to her bones.

Here she learns to hone her magical powers and finds out through dreams the Morgane House will talk with you if you have the right, shall we say, desire.
She and her new found friends uncover mystery after mystery and I was entrapped by their web of lies, not knowing who to trust, and then bam - a twist. Great writing.

All of her characters have dialog flowing that does not bog down your reading. You are right along with them in the midst of their conversations and heated moments. There are so many characters in this novel and I do like to mention my favorite in my reviews and, well, it has to be the Familiars, so ... many favorites. Great characters.

Alyssa Cooper's pace of her story is quick, yet, not rushed at all. A great comfortable mystery read.

Speaking of the theme and symbolism, what an artistic look at local lore. Myths and urban-myths, legends, mysterious fables, etc. - c'mon who doesn't love a great witch story?  Ms. Cooper uses a finesse incorporating 'old-school' magic and today's teenagers' modern ways in laying a solid foundation of a series that will make readers expecting another great read as the next rolls off her imagination from local lore.

Ms. Cooper's voice is young and vibrant as an author. With this energy, an excellent series is borne. I see future plot lines having one mystical twist after another as in The Witches Of Armour Hill: Switch.


Need a great book to read?, I do recommend.


Here's where you can get your fingers on The Witches Of Armour Hill: Switch:


Alyssa Cooper is currently working on her next novel The Witches Of Armour Hill, Book Two: Twisted

The Witches of Armour Hill: Twisted is available now for pre-order, exclusively on Amazon. If you’re an old-fashioned paperback-er, you’ll have to wait until the official release of August 10th - the paperback will be available on Amazon, from the e-store on my website, and, if you live in the Kingston area, from me personally!

Enjoy my interview with Alyssa Cooper