An interview with Renee Logan 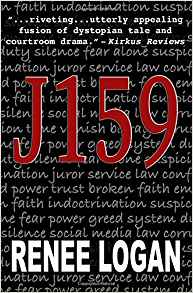 On the behalf of my reader's Renee, I would like to thank you for your time  ~


Who are your influences?

A shorter list may be gained by asking who or what doesn’t influence my writing. I feel that everyone and everything in my life impacts my writing and influences my style. There is a lot to be learned from the story telling abilities of writers, films, and even a tale told by a neighbor over the fence. If I was to be more genre specific to J159, I might say that the descriptive language of the likes of Dean Koontz resonated with me from an early age.

I feel as though I’ve been writing for the longest of times, yet I spent most of those years too afraid to answer the call of the characters and plot lines that were dancing around in my head. Whether it be motivation, stubbornness, or perhaps defiance, I broke through that fear and started writing more seriously around 2013.

How do you come up with your stories, characters, character names, POV, etc.?

My mind does not know the meaning of rest. If I am awake it is juggling a myriad of thoughts at once. Moments of quiet in relative relaxation provide the opportunity for my mind to wander. It is in those moments that I see stories unfold before my eyes as if I am watching an already filmed movie playing in my mind. Interchanging between roles of writer, director, and editor, I move back and forth through the footage, adding, erasing, and manipulating the characters and stories. Of course, most of this happens when I’m in the shower with water running over my face, so the greatest obstacle is remembering all the finely worked details until such time as I’m dry, dressed, and able to write these things down.

If you could actually meet one of your characters, who would it be?  Why?

I’m sure so many people would reply with the name of their main character, but I feel like I know him well enough already. If I could meet one of my characters, I’d probably choose Jack. I’d want to get to know the stories behind the man and learn what it is that molded him into a selfless, courageous individual who would stop at nothing to help a friend.

Do you work from an outline?

Yes. I work from an outline of sorts, but it often ends up being more of a fluid suggestion. It is born of necessity really. I develop my plot lines and characters with iterative passes of the entire story. My mind continually develops the story as a whole, whilst focusing the greatest detail on the chapter I’m writing and those immediately surrounding it. Thoughts that pop up out of order are quickly scribbled down in my notes allowing my focus to return to the chapter I’m writing. And yes… I write my books in order, I don’t like to bounce about.

Tell me about your favorite scene in your novel(s).

Without trying to sound boastful, there are many. There are a few in particular that stay with me. I’ll choose three scenes from J159 for our purposes here today.

1)       The storm scene. I wrote that one while on vacation with my family in a cabin in the Smoky Mountains. Late at night whilst everyone else slept, I wrote. It was calm and quiet outside. I started to describe the encroaching storm that would rattle the nerves of my main character, when the wind outside my own cabin began to blow with gusto. As I tapped the keys, the storm that flickered through my window mimicked the one in my mind. For the briefest of moments, I felt like my words were directing the winds.

2)       The bear scene. Although not actually written until almost a year later, the origins of the bear scene also stemmed from my time in that log cabin. I don’t want to give too much away, but whilst it reads as a work of fiction, the bear scene is actually a true account of my own experience which I was able to graft onto the history of my main character.

3)       The confinement scene. Again, I don’t want to give too much away, it is a suspense after all, but the confinement scenes towards the end of the book are ones that I just can’t shake. No matter how many times I read them, I’m plagued with a visceral response. I’ve had multiple readers tell me that the descriptive language and pacing have made them feel trapped along with him to the point of feeling ill. It’s not comfortable reading. It’s not pretty, so I know I’ve done my job.

Can you tell us a little about your writing philosophy?

Forget “write what you know”, instead, write what you feel. Anything else can be filled in with careful research. I start with a general plot or concept, but true emotions are the most priceless gift to capture with the written word. I guess you can call me the “method actor of writing”. I use emotion memory to live a scene through the eyes of each character as if I were an actor playing their part in a film. It’s not rehearsed or forced, it’s just the way I naturally write.

Have you ever tried writing in any other genres?

Yes. I’ve written and illustrated children’s books and continue to do so as I write within a myriad of other genres. I’m currently writing another thriller titled “The Whittling”, although it also has strong roots in the dystopian, science-fiction, and action genres. I’ve played about with paranormal, had far too many horror stories leap into my head, I’ve even dabbled in family drama and romance. At this point, I’d say very little is off limits. I’m just waiting to see where my mind takes me.

Do you have any interesting writing-related anecdotes to share?

Please see the answers above regarding my favorite scenes.

Do you listen to music as you write?

No, definitely not. I prefer silence. I need nothing to motive me but the confines of my own mind. Sure, a pretty view will relax me and help me stay calm enough to write for longer periods without becoming tense, and the soothing sounds of a thunderstorm are lovely, but never anything artificial. Recordings of nature are infuriating, and soundtracks of the ocean waves make me cringe. Real or none at all, fake is just a distraction. I leave my love of music for when I paint. I am also an artist with a predilection for oil painting. It is not unusual to find me singing and dancing along to tunes while I paint, but never while I write.

As I’ve mentioned already, the plot lines and characters for my stories are often delivered to my consciousness in the shower. I watch them like a movie already filmed and playing in my mind. But they don’t just come out of nowhere. As I step into the shower I not only take with me the weight of my own day, but I also ponder the state of society, situations, and events from around the world. They hit me deeply, on an emotional level. My mind will fixate on one particular subject and then explore hundreds of intricately woven aspects of that topic. In the case of J159, it didn’t take my mind long to run away with the idea of the overwhelming impact that social media has on the legal system and the innate presumption of innocence. Once I got started, my mind just kept asking “what if?”. Before I knew it, I had a collapsed legal system, a terrifyingly oppressive replacement, an intriguing plot, and an isolated main character in despair. Yes, it is clearly a work of fiction, but the circumstances which spurred the creation of the Pure Juror System at the core of J159, really aren’t all that dissimilar from our current situation. 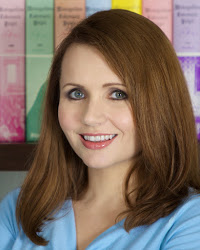 Renee Logan is an Australian born writer, artist, and photographer.  She has lived in Europe and traveled the world, but proudly calls Texas, USA her home.

Renee has written and illustrated children's books, and continues to do so in parallel to her love of writing thrillers, science-fiction, dystopian, mysteries, and general fiction.

With a predilection for oil painting and a vast array of photography interests, Renee's artistic works can be found among both private and commercial collections, as well as print media and advertising. 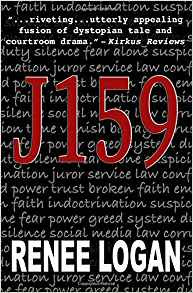 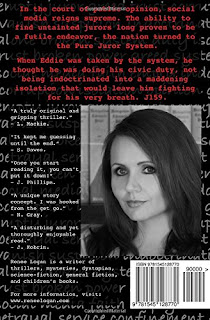 Mmm... These will spark an interest for you ~