Road of Bones by Christopher Golden ~ 2022 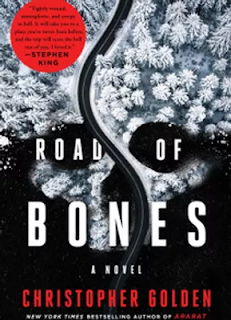 Golden takes words and blows the chill down your spine.

Here's where you can get fingers on Road of Bones: Connect with Christopher
&
see what he's up to
Twitter   Facebook
Instagram
https://www.christophergolden.com/
CHRISTOPHER GOLDEN is the New York Times bestselling and Bram Stoker award-winning author of Ararat, Snowblind, Dead Ringers, and Of Saints and Shadows, among many other novels.
With Mike Mignola, he is the co-creator of two cult favorite comic book series, Baltimore and Joe Golem: Occult Detective. Golden is also the editor of such anthologies as Seize the Night, The New Dead, and Dark Cities, and the co-host of the popular podcast "Three Guys with Beards." He lives in Massachusetts.
✒ ✒ ✒