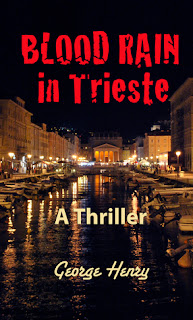 
"This book was provided by George Henry in exchange for my honest review alongside my proffered thank-you for asking."

What an excellent read for thrill seekers! A non-stop action packed read. Milo Marchetti, the main character, is a Canadian Military Intelligence sharp-shooter who turned musician and is co-owner of The Blue Note music club in Trieste, Italy - and has his hands full.

The prologue sets the stage for this page turner - Milo kills a Taliban leader and his family in revenge for the loss of his own family.

Adara, a beautiful Muslim woman enters his blues club and soon a confrontation erupts with these 'goons' picking on his customer. After kicking this guys' ass, Milo finds out later it was only her brother and a couple of his side-kicks protecting her from this so-called sleazy bar.

Well, Milo has problems now. Adara is the daughter of a local crime boss, Mohammed Nasim. The Serpent was pretty impressed at what happened in the bar, so, he offers Milo a deal he should/would/could not decline - hires Milo to keep an eye on his daughter as a bodyguard and with her brother having his ego and pride hurt, tries to frame him for a series of hooker murders. And there's the cop who’s convinced of Milo’s guilt for these murders. There's also the Taliban leader’s Muslim brother who has been selected and contracted to marry Adara. Milo has problems.

On top of all this, Milo's ex-boss Margret Brooke in the military intelligence is peeved for quitting on her in Afghanistan. The Mazzola's, a rival to the Nasim's, enter into his nightmare when Adara and his life are threatened. This read is non-stop total jammin' on every page.

The plot is tight. Let me clarify here, very well thought out and very very plausible. The ending is as exciting as the beginning as well as the middle of the story. And the ending satisfied me with anticipation. Anticipation? yep. Very good read and I can say sequel ... or movie adaptation first?

George Henry had incorporated song titles and mentions musicians by name throughout and I enjoy seeing how some songs and their lyrics go hand-in-hand with a tale.
As I look at my notes here, Mr. Henry takes you traveling - Italy, Croatia, Bosnia, Slovenia, Kandahar, Afghanistan, Zagreb, Ljubljana, Lake Bled and Mostar to name a few. His descriptions of the geography, buildings, food, and people were appreciated and on point.

Characters did develop dynamically and this makes for a great read in my taste. Personable to the point where you are right there alongside them in their endeavors. Well maybe you won't beside Nasim poolside, whoa.

This novel is part thrill, part sexy/romance, part humor, part ... no, all action packed. There was not a dull moment anywhere in this novel other than what I felt was repetitive  - the constant metaphors. Seems to me that metaphors should 'sprinkle' the tale rather than, on every other page, explain to the reader what the situation is compared to. Readers have vivid imaginations. Mr. Henry's writing covered the reader's interest for a great tale right off the rip, so there was no need. I would rather have had the tale sprinkled.

Thank you George for an excellent read.


Here's where you can get your fingers on Blood Rain in Trieste:

Will Milo get the girl? Will he?
Mmm

Enjoy my interview with George Henry

George Henry had found my blog on The IndieView