The Perfectionist by Simon Duke ~ 2016 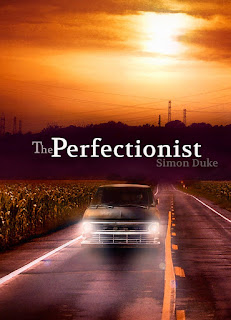 
"This book was provided by Simon Duke in exchange for my honest review alongside my proffered thank-you for asking."

Through this mysterious tale of killings, the murderer randomly kills people - always taking victims from one state and leaving their bodies or body parts in another. Then the murderer goes on another spree, killing in a different modus operandi, but still, repeating and practicing the techniques of death to perfection.

The Perfectionist took me as a tale of exceptional writing crafted by a seasoned pen.
Simon Duke wrote a superb tale of crime and mystery not to be missed folks.

Gerry Stokes, a local reporter/journalist is looking to make amends, for turning the other cheek along with Sheriff Dwayne Clanton, after a severed head was found in a cornfield.

Gerry, the protagonist - what a character. A likeable? womanizing border-line alcoholic with aspirations of leaving Clarion, Iowa and pursuing a career in journalism.

Who could blame him? Needing to leave the pig farm he grew up on and go catch that dream. Enter Chicago and 22 years later ~

Stokes working at the Tribune and living his solitary life with an occasional hooker here and there is contacted by his old editor in Clarion, Earl DeVries. Earl tells him a woman has been asking to contact him, she's thinking the John Doe from back in '88 is her grandfather. Oh hell.

Sara Howard wants to know what has happened to her grandfather and threatens his career if not putting things right. Oh hell again.

This leads to a 3-year investigation in finding a killer. A serial killer who has gone unnoticed for more than twenty years and this where the tale takes flight ~

In the search for the truth regarding Sarah's grandfather Ted Callaway, Stokes starts to see connections no one else has seen and begins to formulate his theory of a serial killer.  As more and more murders appear from the past 20 some years, Stokes and Howard uncover a hell of a story.

Brain Storm - Stokes sees fame ... and money - document all his findings in a book.  He wants to write the book before notifying authorities and it will end by disclosing the murderer. A first in the publishing world!

This guy rubbed me in a way of a self-righteous pompous .... Beautiful writing Simon.

Gerry and Sarah, they work well together trying to piece everything together. I loved the relationship between these two characters, they have really great dynamics with each other. Maybe, just maybe a happily-ever-after? We'll see.

Stokes goes from state to state following nothing more than threads off of leads, many of them from his gut.  Then, in California Stokes, under the guise of his reporter status, tells Elliot Keppler of the FBI he is writing a book on serial killings and this is the reason why Gerry has been poking his nose around these murder scenes. Stokes and Kepplar both want to find The Perfectionist before The Perfectionist commits any more murders.

Gerry's breakdown in front of Sarah and the way Sarah handled it in particular. Down to earth and it would be what I believe how people would handle the situation.

Loved how Stokes took a reluctant professor and used his clout to pursue his quest of the killer. Professor Dennis Morton was instrumental for Gerry.

Didn't care for Reggie Wheeler's wage calculations.   Reason being, I can't see someone would stand there and go through that mindless chatter of calculations, especially, when everyone knew where that bottom line was headed.

Enthralling read folks.  Really really good read. There are plenty of  twists and turns as you travel with Gerry across the United States and when you come upon the part with Avery - just watch how Simon Duke's characters meld into other character development.

There were, it seemed to me, places Simon Duke wrote The Perfectionist almost like a procedural manual on how to go about uncovering a murderer. He had to have done his homework to make plausible scenes go according to plot. I'm not an expert, I can say though, I've read Patricia Cornwell's Portrait Of A Killer: Jack The Ripper Case Closed - that's how you do your homework for plausible scenes.

As I read, the scenes and settings were coherent with my senses, so, being in the midst of all the action is a must for a reader and Simon Duke does a beautiful job in handling that bit of necessity.

End satisfy? Sure did folks. Hell, The Clincher/Twist at the end summed it up satisfactorily for my needs. Was not expecting that. Thanks Simon for a great crime mystery.


Recommend with a resounding Yes ~ and recommend The Perfectionist to a friend folks.


Here's where you can get your fingers on The Perfectionist:

SIMON DUKE was born in Stoke-on-Trent (UK) in 1979. He obtained a B.A. in French with Film Studies in 2001 and has been working in journalism ever since. He currently lives in France. Out of Bounds, his first novel, was published in 2014.

Give Simon Duke a shout

Enjoy my interview with Simon Duke